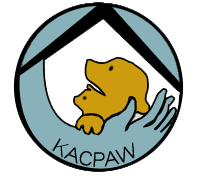 KACPAW was formally established in January 1999. But, we started our work on caring for destitute dogs in November 1998, 16 years ago!

We take pride in the fact that KACPAW is seen as a very reliable organization by relevant officials as well as the public. Over 16 years we have provided unstinted care for needy dogs and offered practical and doable solutions to the stray dog issue in Sri Lanka primarily to ensure that we deal with the problem humanely. Our contributions have been both at macro- and micro-levels. Sixteen years of work is summed up below for you to read leisurely.

♦ By 2000 KACPAW built its own shelter and till May 2010 cared for over 4,500 destitute dogs and found homes for more than 3,500 of them in a vibrant rehoming programme. All the dogs who went through our shelter were spayed/neutered and vaccinated against rabies, parvo and distemper.

♦ In May 2010 we closed the shelter to concentrate on sterilizing dogs with the country’s No-Kill Policy on dogs coming into effect in mid 2006. The remaining 30 odd dogs of the shelter who could not be found homes at the time of closure owing to physical debilities, behavioural problems, and old age, were placed for life in a unique sponsorship scheme through which we found them several homes to be strictly monitored by us. See at: https://www.facebook.com/media/set/?set=a.10152447366499357.1073742038.76793989356&type=3 As at now, only 6 of the original “Shelter Residue Dogs” are alive. See an appreciation of our shelter work by Care 2 at: http://www.care2.com/causes/kacpaw.html

♦ In the initial period KACPAW worked closely with the Governor of the Central Province in formulating and carrying out a humane stray dog control programme in the Central Province. We introduced the red collar to identify rabies vaccinated dogs. Unlike now, people were skeptical about sterilizations. So a lot of awareness was necessary during this period. Now we cannot keep up with the demand for spaying! 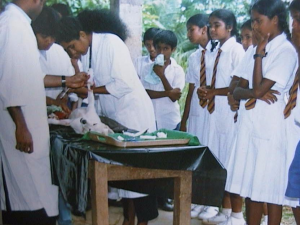 We did many spay programmes with the Veterinary Faculty of the University Peradeniya early on and conducted school awareness programmes on rabies and taking care of pets and the value of sterilizing dogs.

♦ In October 2002, KACPAW conducted a National Conference on Rabies Eradication jointly with WSPA (World Society for the Protection of Animals) and produced a five-year rabies elimination action plan in association with the Health Ministry, the WHO, and WSPA.

♦ At the conclusion of the conference KACPAW together with WSPA conducted two workshops: 1. Early-Age Neutering (dogs of both sexes as young as 2-3 months can be spayed/neutered); 2. Humane and Safe Dog Catching, introducing to Sri Lanka both methods.

♦ KACPAW served in the National Committee of Rabies Elimination and, under a sub-committee led by the Health Education Bureau, produced a leaflet on Responsible Pet Ownership in all three languages (1 million in Sinhala, 200,000 in Tamil, and 50,000 in English) which was funded by the RSPCA (Royal Society for the Protection of Animals, UK); these leaflets were distributed island-wide.

♦ In a bid to further strengthen the Health Ministry’s efforts in eliminating rabies through humane methods of dog control, KACPAW, using RSPCA and WSPA funding, donated to the Ministry 4 three-wheelers to be used for the National rabies/dog birth control programme.

♦ After the Tsunami, KACPAW funded a rabies vaccination programme of free-roaming dogs in the tsunami-hit areas from Kalutara to Hambantota and donated 2,000 red collars to be put on owned dogs that they would be vaccinating in rabies hot-spot areas of the Southern strip.  KACPAW also donated 50 catch poles to the Health Ministry.

♦ KACPAW contributed to Sri Lanka’s Animal Welfare Act from its inception by way of views and suggestions at a series of workshops.

♦ KACPAW contributed to Colombo University’s Medical Faculty’s efforts at setting up institutional ethical review guidelines on how to treat animals used for research. Accordingly, Ethical Review Committees will scrutinize research proposals to see whether animals are being used unnecessarily for research and determine approval accordingly. This document was launched in April 2010.

♦ In late 2006, KACPAW developed a model via a pilot project it did in order to study the trends developing with regard to rabies and dog population control in a bid to find a model of dog population control that can be applied island-wide. Our single-most and biggest contribution to dog sterilizations was this model we provided to initiate island-wide state-funded spay clinics in 2008 without which the No-Kill policy could not have been maintained.

♦ Through nearly 30 Central Province (CP) Government Veterinary Surgeons (Range Vets), free spay clinics were carried out by KACPAW in 2004 and 2005 for 2 years in the respective AGA divisions of these veterinary surgeons. The veterinary surgeons were provided training in early-age neutering by KACPAW through the Veterinary Faculty of the University of Peradeniya. In 2013 too KACPAW carried out numerous spay clinics organized by several Range Vets of the CP, spaying thousands of dogs. See a sample at: https://www.facebook.com/media/set/set=a.10151688225394357.1073741854.76793989356&type=3

♦ KACPAW continues to help the Nuwara Eliya Municipal Council (MC) to humanely control their dog population by doing annual spay clinics since August 2014. To date over 700 dogs have been spayed for the MC in three clinics. KACPAW came within the first three from applicants across the world to receive a grant for this work from Naturewatch Foundation, UK, under its World Animal Day Programme in 2014. See at: Link

♦ Our spay clinics are ongoing. In 2015 we have spayed 2,500 dogs. From the inception up until today, KACPAW has provided free sterilizations to the public and have to date sterilized over 20,000 dogs.

♦ We have scheduled spay clinics for 2016 as well.

Rescues/Adoptions and Other Work that Ensures Benefits for Animals

♦ Anuradhapura Nellikulam Dog “Shelter” rescue work in January 2014: This was a major rescue we did.  This was an emergency project undertaken to solve a problem caused to the villagers of Nellikulam because of a dog facility established in May 2013 and filled up with dogs without proper care or food or water. It was a major animal welfare problem too in which 1000s of dogs suffered. KACPAW treated nearly 300 dogs held at this place for mange and other diseases and had 30 odd dogs treated in Kandy and Colombo as well since 16th of February2014 over 7 Sundays and helped the Anuradhapura Municipal Council to relocate the healthy dogs to the areas from which they were brought as decided by the authorities. There are many FB posts on this rescue. Here are some (could be very disturbing):

♦ While focusing on sterilizations, KACPAW still does rescue work and treatment of dogs if there are requests from the public, particularly involving stray/community dogs. The number of dogs helped annually stands around 1,000. We also do adoptions, but would really like to see less and less dogs needing to be adopted.

♦ Improvements towards Patient Care at the two vet hospitals: KACPAW refurbished (gave dog beds, rice cooker, washing machine, dog bowls, cleaning tools like brushes and wipers, etc.) both the Veterinary Teaching Hospital (VTH) Wards run by the Clinical Dept of the Vet Faculty of the University of Peradeniya and the Wards run by the Getambe Government Vet Hospital so that patients warded in the two hospitals have a comfortable stay.

We also donated veterinary equipment (e.g., ECG machine to VTH/cautery units to both so that unowned dogs can be marked with an ear notch as sterilized) and a Walk Way connecting the clinic to the wards, to the VTH.

♦ KACPAW asks for Constitutional Protection of Animals in Sri Lanka from the Public Representations Committee on Constitutional Reforms. (Links to the submitted documents below)